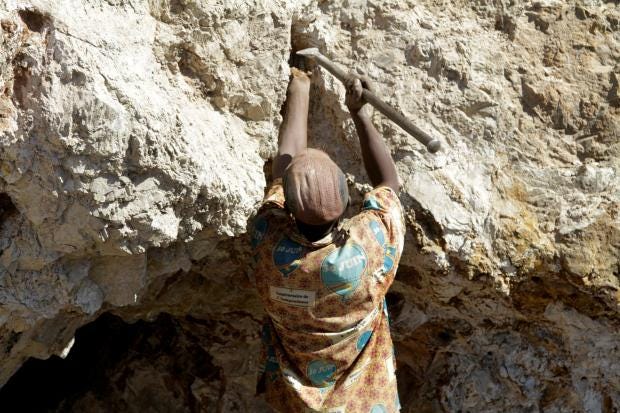 Cobalt left other metals in the dust this year, driven by demand from electric carmakers such as Tesla.

But with new supply coming online and high prices likely to spur substitution and recycling, the market for the key battery component could prove choppier next year.

Here are five themes that will capture the market’s attention in 2018.

After prices more than tripled in the past two years, cobalt has become a valuable prize for the handful of miners producing it at scale. The global market has increased from about $4bn (£2.9bn) a year at the end of 2016 to about $8bn now, and is roughly equal in size to the tin market.

Because cobalt’s mainly mined as a byproduct of copper and nickel, higher prices don’t tend to stimulate new supply in the way they would in other commodity markets. But with cobalt delivering major windfalls, producers are doing their best to ramp up output.

The larger-than-expected expansion at Glencore’s Katanga project, in particular, looks set to delay the onset of a shortage that many analysts see emerging as usage in electric vehicles starts to spike towards the end of the decade.

“Katanga changes our view on cobalt over the medium term,” said George Heppel, a consultant at CRU Group. The researcher has changed its forecast for 2019 from a market deficit to a surplus.

At the same time, few greenfield projects are likely to make it to production in the foreseeable future. “We’ve got a database tracking about 400 potential cobalt projects, but at this stage there are only about three that we’re taking seriously,” Mr Heppel said.

That’s likely to leave cobalt consumers nervous about long-term supplies. Glencore boss Ivan Glasenberg confirmed the miners are already in talks with buyers, including Tesla and Volkswagen, and those negotiations are likely to progress with urgency next year as the carmakers move forward with ambitious plans to roll out mass-market electric vehicles.

Demand from carmakers in China also looks set to rise amid a surge in electric vehicle sales. Orders for battery-powered cars were up 51 per cent at 609,000 in the first 11 months of the year, and Bloomberg New Energy Finance says sales could surpass one million next year, almost equal to this year’s global total.

Carmakers hunting long-term supplies may be more willing to link sales to floating spot prices. Volkswagen asked producers to supply cobalt at a fixed price in a long-term tender in September but has since relaxed its demand, according to people familiar with the matter.

Easing sales constraints may help bridge the divide between consumers wanting long-term supply and miners worried about leaving money on the table. “There are a lot of customers who want to lock in a supply but, naturally, we will keep the price floating,” Mr Glasenberg said on an investor call.

Next year could also be a critical one for the London Metal Exchange (LME) as it seeks to tap the boom in electric cars to boost usage of its contracts. Trading volumes are growing, but so are concerns about the provenance of cobalt in its global warehouse network. The LME has asked suppliers to detail their efforts to avoid exposure to cobalt from artisanal mines in the Democratic Republic of Congo that often rely on child labour. The impoverished African nation supplies about two-thirds of the world’s cobalt.

Carmakers are looking for ways to use less cobalt because of soaring prices, Colin Hamilton, managing director for commodities research at BMO Capital Markets, said by phone from London. “Battery chemistry won’t change overnight but given how the price has moved, carmakers are definitely going to be leaning on the battery industry to push substitution.”

At the same time, recycling firms will be looking to recover more cobalt from used batteries. Cobalt from lithium-ion batteries could reach 22,500 tonnes in 2025, up from 8,700 tonnes in 2017, according to Creation Inn – a London-based research firm focused on energy storage and recycling.